When I started retiring in 2006 I returned to an hobby I had growing up: coin collecting.  Well not exactly, more to the point would be to say collecting award medals from the world fairs and expositions of the late Nineteenth and early Twentieth Centuries. 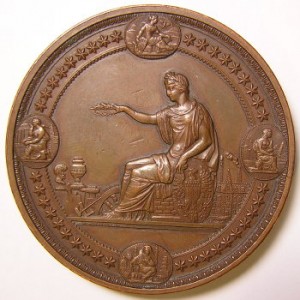 The first US expo was in 1876 in Philadelphia to celebrate 100 years of our new county and it was called the U.S. Centennial Exposition.  Nice 76mm size chocolate colored bronze award medals were awarded by the United States
Centennial Commission.  There is large award medal, a small award medal and as in other expositions many different types of souvenir medals issued.

The 1880’s and 1890’s was the heyday of these expos and award medals were issued for Gold, Silver and Bronze at most of the expos.  Sometimes a box or case comes with the medal.   Some Gold and Silver medals were issued in bronze and it was up the prize winner to put a gold or silver plate on them.   But some medal are pure silver or gold.

Expos include the 1884 New Orleans Centennial Exposition, the 1893 Chicago Columbian Exposition which was the largest and grandest of them all, the 1895 Atlanta Cotton States Exposition (my specialty).  Some of the most popular of the other expos were the 1904 St Louis – The Louisiana Purchase Expo and the 1915 San Francisco Panama-Pacific International Expo.

The medals are a great fun to collect.  They are very artistically designed and great to examine by hand.  Most are quite reasonably priced to collect and EBay and auction companies have an impressive supply.   I have really enjoyed learning the history and something about each of these great expositions.

I couldn’t find a good reference for these medals when I started collecting, so I started ExpoMedals.com to showcase them and provide info for other collectors.  Putting my collection (and other images provided by collectors) on the web site has been a wonderful bonus to me, putting me in touch with other collectors and providing a much needed reference to my hobby. 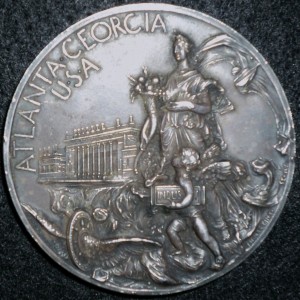 Two of my most recent medal acquisitions are this silver medal from the 1895 Atlanta Cotton States Expo which I just love because that is the expo I started with and Atlanta is where I live. 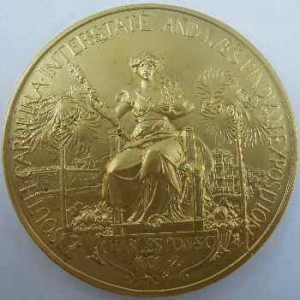 Then this Gold Medal from the 1901-1902 Charleston Expo, which in my opinion may be the most beautiful medal from any of the expos.

On ExpoMedals I have listed links to other medal collecting resources including a club, websites, auctions, and dealers. 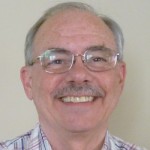 Robert Fowler is retired but his retirement job as President of Retirement Media Inc. keeps him busy with sites like 55CommunityGuide.com