“Sleepytime” is a LP that was created specifically by Abbott Laboratories in 1972 to promote the sleeping medication Ethchlorvynol-(Placidyl)  It would be interesting to know other Jazz greats that were used as a marketing tool for pharmaceuticals.

This LP is a compilation of some of Louis Armstrongs’s hits from every period of his career. It includes “St. Louis Blues”, “Cabaret” plus “All of Me”.

It was produced on the Columbia label. 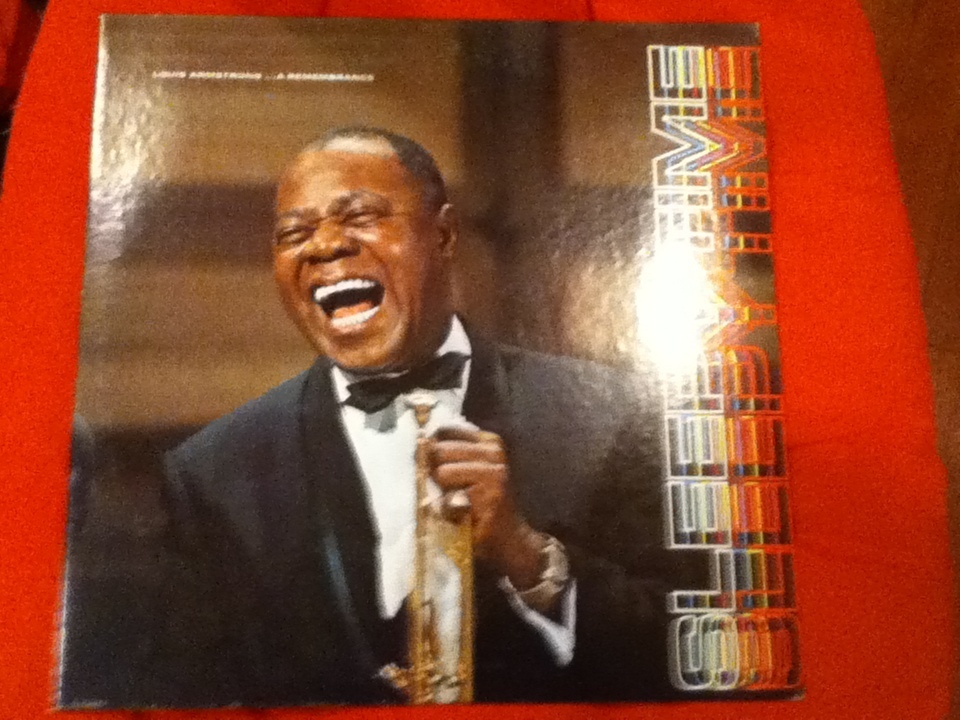 Liston to “All of Me”

The Dynamic Angelic Choir directed by Rev. Lawrence Roberts is a classic gospel favorite. According to the Black Gospel Music Blog, :

Rev. Roberts was a longtime producer for Savoy Records. It was his church choir — the Angelic Choir of the First Baptist Church of Nutley, NJ — that teamed with Rev. James Cleveland on the historic “Peace Be Still” recording session in September 1963. That album took Cleveland and the Angelic Choir to new levels of popularity in the gospel music industry and helped make Savoy the “go to” label for gospel choirs for the next three decades.

Rev. Roberts also recorded with his wife and with the Gospel Chordettes, which changed its name when the Archie Bleyer Chordettes (“Mr. Sandman”) took issue. Rev. Roberts said he changed the group’s name to the Lawrence Roberts Singers “because I know nobody had THAT name!”
Here is a recording from The Dynamic Angelic Choir.

I love old vinyl and was delighted to find this copy of “Meetin The Followers”. O was more overjoyed to find out that Nick Ashford and Valerie Simpson were singers with this group in 1963.

Every LP has a story behind it. This particular record includes eight compositions written by Ashford and Andrew Cooper. It is also on a vintage orange and yellow label called Roulette.

Now when it comes to looking at rare labels I always like to go to Vinyl Beat. That’s where I saw the variations of the label this lp is on. I also look at this site for rare Gospel , Country and R&B. There are other sites and would love it if you shared them.
Listen to a short clip from the LP

You can view a current sale of ‘Meetin the Followers’ by clicking on this link.

I did not know that Roy Hamilton recorded “You’re Never Walk Alone” Below is a brief overview of his life from Wikipedia.

Born in Leesburg, Georgia, Hamilton moved to Jersey City in 1943, studied commercial art, had operatic and classical voice training, and was a heavyweight Golden Gloves boxer before joining the gospel quartet, The Searchlight Singers. In 1947, he entered and won an amateur talent show at the Apollo Theater with his rendition of “You’ll Never Walk Alone”. However, he did not record commercially until 1953, when he was discovered singing in a New Jersey club by a local DJ Bill Cook, who became his manager.Columbia Records saw him as a possible “crossover” singer with a foothold in both pop and R&B, and signed him to their subsidiary label Epic.[citation needed] His first single, “You’ll Never Walk Alone”, became an R&B number 1 for eight weeks, and a national US Top 30 hit in 1954, and shot Hamilton to fame.

In mid-1956, Hamilton announced his retirement due to illness and exhaustion, but returned the following year.When he came back, he adopted the harder gospel sound of his youth, to compete with rock and roll and the emerging soul sound Hamilton appeared in the film, Let’s Rock, in 1958. His last hit record, “You Can Have Her” (#6 R&B, #12 pop), came in 1961, and was followed by the album Mr. Rock And Soul (1962). The Epic label treated Hamilton as a major star and issued sixteen albums by him. However, by the mid 1960s, his career declined while recording with MGM and then RCA.

His final recordings were made in Memphis, Tennessee, at record producer Chips Moman’s American Group Productions studio, at the same time that Elvis Presley recorded there in early 1969.[citation needed] Songs released from those sessions were versions of James Carr’s “The Dark End of the Street”, Conway Twitty’s “It’s Only Make Believe”, and “Angelica”, a Barry Mann and Cynthia Weil song that had been submitted to Presley, but which he then turned over to Hamilton.

Hamilton died later in 1969, not long after suffering a stroke, at age 40, in New Rochelle, New York. Hamilton’s “You’ll Never Walk Alone” disc was brought in from the US by a sailor friend of Gerry Marsden. As a result, Gerry & the Pacemakers recorded the track to further success.

Hamilton was inducted into the Georgia Music Hall of Fame in 2010.

Many of his recordings are available. You can grab a brand new recording of Roy Hamilton, Mr. Rock and Soul by clicking on this link.